So today was the first day that I actually felt like I was living the life as a "farmer's wife." The Farmer had practice early this morning so he had decided to head into the farm this afternoon. He had asked in the morning if I wanted to go with him and my response had been, "I don't think so," but when he came home from practice he said he really wanted me to go. Since I couldn't find anything else to do, I decided I would go. (I'm reeeeeally glad I did).
I put on my worst pair of jeans, a tank top and a long sleeved shirt and we were ready to go. We stopped at Circle B (a farm store) when we got to town so we could buy some gloves for me and some screws for The Farmer's new license plates! We both have Iowa drivers' licenses, but only he has the plates. :) I got some good lucking brown ones and we were set. I wasn't sure what we were going to do, but if you read The Farmer's blog, there wasn't any burning involved today. Maybe next week we'll burn what we did today.
Jake (Grandpa's dog) ran out to greet us and we stopped inside to say hello to Grandpa and Maxine before heading out to the field. When Grandpa saw us, it must have sparked something in him because a little while later we saw him out on the riding lawn mower. The Farmer handed me a shovel (that I didn't use) and he grabbed an axe and we were off. After explaining to me what we were going to do, we got down to business. We were working on the multi-flora roses which are like small trees! The Farmer would hack them down and I would drag them along with other branches or large pieces of wood to our burn spot. We finished in one spot and moved down towards another. It went on long this for quite awhile. We did have some excitement during our hauling though. Jake caught a mouse AND ATE IT right in front of us. Actually, we didn't see him catch it, but The Farmer said, "I think Jake brought us a present" and called him over and GULP, he ate it. Then later, I pulled up an old piece of wood and a small snake crawled out. The Farmer grabbed it while I grabbed the camera and he was opening his mouth and NOT happy with being held. 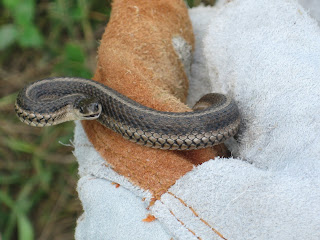 Awhile after the snake escapade I started to get pretty tired (I'm not used to pulling giant weeds in the heat!) and told The Farmer I was going to rest. 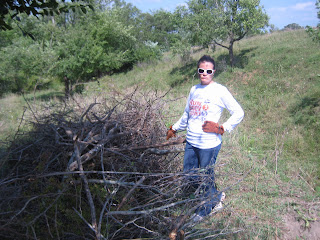 Me with my pile to burn and my "tough farm girl" face.
The Farmer: "Save your energy because I need you to help me get that turkey tent." (Explanation: turkey hunters left their tent on Grandpa's property awhile ago and it was still there.)
So I didn't go far. At first, I just climbed up on one of the gates and sat for awhile watching the cows. The bull is really ugly, mind you. He looks like he has a head of hair though and that is pretty funny. I decided to take a walk down the farm land and thought Heath would be there awhile so I went. As I passed the cows, they all turned to stare and the bull was actually nuzzling one of the babies (so cute). I walked following the fence for awhile, Jake bounding around in front of me until I decided I wanted to get a closer look at the pond. Now the fence is barbed wire so I had to figure out how to get over the fence without killing myself. A corner post made this easy and I hopped right over. Getting back into the back pasture where The Farmer was...not so easy. I walked along the fence by the pond and headed back up the hill (literally, it's like hiking) to try to get back into the back pasture. I thought the fence would open up, but it didn't. I watched Jake and decided I'd try another corner so I followed the fence down to the very end of the property and looked for a post like the one I'd hopped earlier. No such luck. BUT! there was a line of barbed wire missing so I ducked down and out of the property (still not into the pasture), debating what do to next, I almost fell and then decided I'd have to limbo low and go under the other piece of fence. The barbed wire tugged at my shirt, but I managed to escape unscathed.
While exploring the farm for the first time on foot (grandpa took us by truck in May), I saw a lot of what The Farmer has seen and believes in for the first time. I could see our children growing up here and the endless possibilities scattered across the farmland. For the first time, I felt like I was here because I was meant to be here, supposed to be here. What I mean by that is I moved to Des Moines because I love my husband and I trust him with all of my being. I also know he has a strong relationship with God and if he felt God pulling him to the farm, then I was going with him. But today, I felt more than being here because I love The Farmer. I felt like this is exactly where God wants us to be right now. To be a kid on the farm, wow! it would be amazing. I also realized this was my first time on an ACTUAL farm, exploring the land by myself. Is it scary? A little, but only because it's new and unfamiliar for me. Is it exciting? Absolutely. How do I feel about getting sweaty and dirty? Fine, actually. My only problem therein lies with the ticks. I found yet ANOTHER tick on me on the way home from the farm. It was crawling up my leg, but I think I handled it pretty well and with the way things are going, I decided I better get used to the stupid bugs.

When I finally got back to where The Farmer was supposed to be, he wasn't there. I figured he'd started for the turkey tent so I hopped the fence AGAIN and walked down the farm land past the cows again. I could see him in the distance and thankfully he turned around and saw me and waited until I walked the 1/4 mile to catch up. We shimmied under another piece of the fence as I told my story and headed into the woods to find the turkey tent. 30 minutes, 3 fake turkeys and 5400 ants later, we had the tent in it's pack and the turkeys in a bucket and headed back to the house. Shimmying would not be so easy this time. The Farmer decided to jump the fence and I followed suit, BUT! ripped my pants on the barbed wire. However, instead of being upset I thanked God for it only being my pants and not my leg. We hiked back up to the farmhouse and got rid of the bucket before heading inside to say goodbye.
Maxine had made homemade cinnamon rolls so we definitely had one of those before we left. It was fabulous. I need to take some baking lessons! I also hope she teaches me how to can items as well. This was the real day one for me and it was worth it.
Posted by The Iowa Farmer's Wife