The Birth of Sweet P

Friday my mom and I went out shopping, to lunch and then to The Farmer's high school soccer game. I had been feeling more regular BHs and so my mom started timing them. I sort of lost track of them at the game so I thought maybe nothing was going to happen (I was in huge denial). Went home, made dinner and The Farmer called to tell me he was going to stay at the girl's soccer game (after his) a bit longer. I told him tonight might be the night and he says he remembers thinking I hope not, I'm exhausted. Little did he know.
After dinner we started timing the contractions while I was laying down and they were coming every 5 mins for a minute for an hour (still in denial) even when I was laying down. I said, I reallly want to shower and my mom said you better do it now. So I showered and laid down on the bed. All the sudden I felt the baby kick and then pain and knew that was my first real contraction so I called our midwives. Sandy (who was on call) called me back (it was about 11:00pm) and said to try to rest and that if my water broke to go in, but not to go in yet. So we put on Nacho Libre and I tried to lay on the couch. I decided to sit on the birthing ball and when I stood up felt something trickle out. I went to the bathroom and leaked even more and knew it was probably time to get going.
We decided it was probably my water breaking and rushed around to get everything in order. Amazingly we didn't really forget anything. We got to the hospital at 12:30am and they checked to see if I was ruptured and as soon as she went to check, it broke completely and she said, WELL we don't even need to check.
One crazy part: We were put in the c-section portion of the maternity ward because there were 21 babies born Friday, May 1st!!!! We got the last room! If we'd been any later we wouldn't have! There were women laboring in triage, and 3 laboring in an old nursery!!!! I was pretty active walking around, on the birthing ball, etc. and about 5:30am I started to really feel the pain. I was exhausted and only dilated to 4cm and began considering my pain medication options. I was upset because I really didn't want to do it, but it was getting really hard and I knew that if I didn't get some rest I'd be too exhausted after being up all night if I didn't start progressing. I kept asking The Farmer if he was okay with it because I so badly didn't want to. I even asked him and my mom if they'd think less of me if I did it. I had made up my mind a long time ago that I didn't want an epidural because I've had one (for hip surgery) and didn't want to do it again. Exhaustion was taking over and I made up my mind to do it. I started with Fentanyl and they started an IV in case I wanted an epidural. The Fentanyl just made me drunk and only sort of masked the pain. After a half hour, I decided to go for an epidural. Because of all the laboring in the ward it took awhile for the anesthesiologist to get there. Once it was going I fell asleep for about an hour and a half. My nurse went off duty at 7am and a new one came on and they decided to check me again at about 8:45am. They were afraid the epidural had slowed things down so they were worried they'd have to start me on Pitocin. I was not happy about that but they checked and I was at 8-9 cm! They were really surprised and 45 mins later I started pushing.
It was tough and the epidural wore off so I felt absolutely every contraction while pushing. After 2.5 hours my midwife asked if I would be opposed to a vac (also on my birth plan, as was no pain meds). At that point, I said, please just get her out. 45 minutes later (lots of laboring mamas in the hospital) they brought in the presiding OB (my midwives are not certified to do vacs) and as she was explaining what would go on I siad, I DONT CARE what you're going to do, Just DO IT. I was a little impatient at that point and ready to have my baby! She said, "I have to tell you what's going to happen." The vac wasn't the rough part it was the numbing before and then she said if it didn't work we'd have to c-section and I was just praying that she'd get her out on the first go. I don't know how my body was still working at that point, but after 2 pushes, our beautiful daughter was out and on my chest crying and looking around! The Farmer, my mom and I were bawling messes and The Farmer even checked to see what song was playing when she was born. He then cut the cord and they cleaned her up before giving her back to me. We were together for the rest of the time after that. They said the problem was that I would push and get her head down and as soon as I rested, her head would go back up and I just couldn't get it in the pelvic area to stay. This was due to how big her head was. There was also a lip on the cervix in the way that my midwife would have to hold down while I pushed. I have no idea how many stitches I have but I know I have internal and external. My child just has a large head! 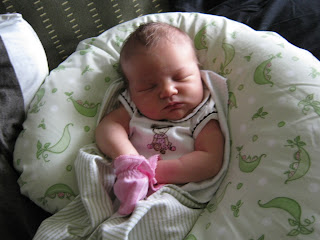 She was 8lbs 11.9oz and went home 8lb 4oz. She's just awesome. The Farmer was also amazing. I couldn't have done it without his calmness and encouragement. I was a bit sad my midwife didn't get to deliver the baby, but the fact that she was out and safe was all that mattered. We spent 2 days in the hospital and are now home and doing great!
Posted by The Iowa Farmer's Wife