I can't believe how fast my baby is growing up! She is getting bigger. I know, I know, you're thinking "How much bigger can that little chubby bunny get!" 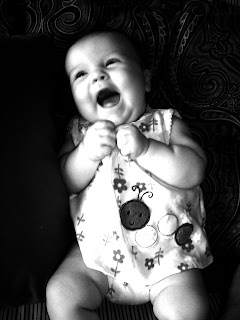 We had quite a busy week this week! I joined a few "mom's groups" and we've had a few "playdates" this week! Sweet P isn't much for playing yet, obviously these are much needed social outings for me. On Wednesday we went to a park and sat under some trees at a picnic table. We met 4 other moms. One who makes her own cloth diapers! Let me repeat that, She MAKES them! When she said that I had major sewing envy. Don't get me wrong. I can sew. Sort of. I have had my go with a sewing machine a few times. I made a t-shirt quilt out of old sorority t-shirts a few years ago while recovering from hip surgery. Wow, that just made be sound like an old woman. And the day I went into labor I made a "hooter hider." I get the funniest looks when I say that. I suppose it's much easier to say nursing cover, then people don't look at you and say "A what?" I'll post a pic of my cute "hooter hider." I'm 40 weeks pregnant in the picture! All that to say that I was really impressed with her cloth diaper making skills.

Thursday we played clean up the house. Well, I did anyway. Sweet P isn't much for cleaning, yet. But I like to tell her as she watches me load the dishwasher that one day it will be her job. She'll definitely be a vacuumer as well because she is fascinated by our little vacuum (the one we use for the kitchen, the big one scares her to death because it's so stinkin' loud). Our reason for cleaning is because we had our first guests over for dinner! We've had people over before, but they were all visiting from out of town so they don't count. Heath's assistant coach, his wife and their 3 month old came over for some yummy baked pasta that I made and an awesome salad (lettuce courtesy of our garden!). Unfortunately, I didn't get a picture of the food (it might have been a little awkward to stop dinner for a photo session). 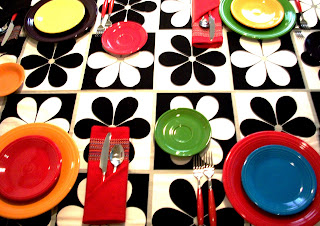 We've been married a year and haven't used most of our FiestaWare so I busted out the good stuff for our friends. I even got out a table cloth! It didn't take much to make our every day table into a dinner table. We have FiestaWare in 6 different colors so there are 2 of each color in the place settings. How cute is that tablecloth?! My sister found it years ago at a sample sale. Ohh, the days of the sample sales. How I miss all the goodies she'd bring us when Macy's had them. But, I digress. Did I mention that we had an awesome salad? 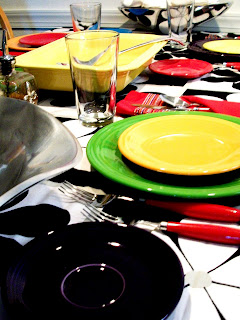 Today we had another mommy group playdate and went to the Better Homes and Garden Test garden. BH&G's parent company is located in Des Moines so we have a cute little test garden right downtown! You can't even tell it's there because it's shielded by walls and only open to the public for 2 hours a week! It's really cute and there's a neat little spot with a fountain to have lunch. Unfortunately, I didn't know it was a bring your lunch event and sat there wishing I had known. Especially when I started to get dizzy. I've had some dizzy spells lately and after having a doctor make me want to punch her (and learn that my thyroid is normal and it's not anemia) I figure it's my blood sugar getting out of whack. It really is important that you eat every few hours when you're nursing. Especially if you have a 15 pound 2.5 month old. I talked to one of the moms about hummus and was licking my chops staring at hers that I had to make it when I got home. I took a few pictures of the garden so I could show The Farmer because he's got big plans for a new garden on the farm next year. He's started the digging for it already. 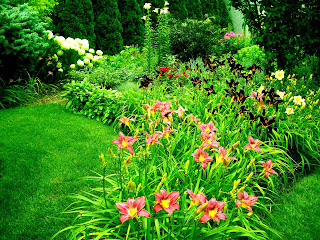 And finally, we went out to dinner at a Mexican restaurant tonight. We have a staple Mexican food restaurant we like to eat at, but decided to go out on a limb and try a new. Bleh, we should've stuck with our regular. It was clear the red sauce was out of a can and the rice was definitely packaged. You can't fool us, we're New Mexicans! It took me a long time to realize why people always laughed when I said I was a New Mexican. And I'll end here with a funny story. We were telling The Farmer's little cousin one time that we were from New Mexico and his grandparents tried to explain by saying "Remember we went to Mexico, but they are from "New" Mexico and he said, "I want to go to the new one!!"
Posted by The Iowa Farmer's Wife