When I was pregnant, I ate pancakes at least once a week (sometimes twice, but who was counting). I have no shame in this, especially because it's not like I was eating IHOP pancakes every week. I was making my own. I eyeballed the ingredients to see how much I would need for one serving. Now don't go thinking I was only making for myself and not my cute little husband. He was usually out of the house looooong before I even got of bed while I was pregnant. In my defense I worked until 10:30pm most nights (until the last 4 weeks) and didn't get to bed until usually 1am. I did make them for him one weekend that I remember, but usually these are enjoyed by myself. I had them for the first time since I had Sweet P on Saturday morning. The farmer had already gone to the farm and I wanted something more than cereal. I don't know about you, but the weekend mornings always seem to deserve a better breakfast (like a donut at church on Sunday) than the weekday mornings.

All that to say that I am posting the recipe just for you! So you can have your very own single serving pancakes! I tried to make them as healthy as possible, but sometimes that just doesn't work with pancakes.

1/3 c. whole wheat flour
(don't bother substituting that white flour stuff, it's not good for you and you won't get the same result)
1/3 c. oatmeal
1/3c. plus 2 tbsp soy milk
(you can use regular milk if you'd like, we just have the soy stuff around here)
1 egg
(here you can also use 2 whites, but you should really just buck up and eat the whole egg)
1 tbsp sugar
(just for fun, sometimes I use brown, sometimes white)
1/2 tsp cinnamon
(you don't have to use that much, but do you know how many antioxidants are in that stuff? Me neither, but I've heard it's a lot)
A handful of nuts
(optional, especially because we don't always have nuts around. I use hickory nuts, walnuts or pecans.)

Mix all ingredients in a bowl. Heat the skillet between low and medium, oil the pan (I use olive oil for everything I cook in the pan, but if you must please feel free to use butter. Pam also works.). Sometimes I like to make a few small ones, other days I'm feeling adventurous and make one BIG pancake.

Toppings: Strawberries, bananas, blueberries, raspberries, the possibilities are endless. I usually top it with whatever fruit I have on hand, syrup (sorry I just use any old kind, if it was less expensive I might buy real maple syrup) and powdered sugar. Yum. Oh, and heat up the syrup. It just tastes better that way. 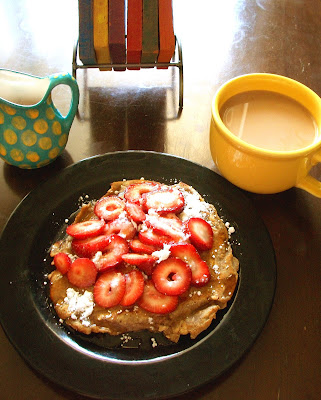