How many parents does it take to install a car seat? Well, apparently more than the two of us. We decided yesterday afternoon would be a good time to install the car seats, especially because she could arrive at any time. We were fortunate to receive a convertible Britax Marathon from my older sister and bought an infant car seat for The Farmer's car. The Britax was the bigger of the two, so we decided to tackle that one first.

One hour later...we were still trying to get the stupid thing in my car. My car was made before 2002 so unfortunately it did not have the "latch" system that was apparently the easiest way to connect the car seat. We looped that seatbelt through the car seat about 100 times before we gave up and decided to come inside and search for a demo video online. What the heck did people do before demo videos? We had to watch one for our stroller AND the Britax?! What kind of parents are we? We blame the Britax instructions. They were not very thorough and didn't make a lot of sense. However, once we watched the demo (and The Farmer got some food in his tummy) we went back out and had the thing installed in 2 minutes. Sheesh. And while it was a pain, I do love that Britax. I will, however, let you know more about it once I have a child to put in it and see if it as great as it looks. 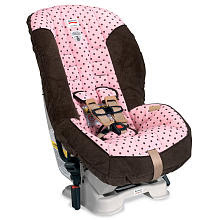 The Graco base for the infant seat was a breeze. I think we only had to do it twice before it was set.

So here we are. We have our car seats installed, our co-sleeper put together, baby clothes washed and put away, diapers and wipes. Now all we need is a baby!
Posted by The Iowa Farmer's Wife