Last week we embarked on a fun new adventure with 3 of our friends who are also planning to homeschool their kids. The 4 of us came together and started a Mommy & Me Book Club! I hosted the first one at our house and chose the book "The Snowy Day" by Ezra Jack Keats.

We read the book, had a snack, talked about how snow is formed and then did several activities. I was a little nervous about how it'd go with 5 kids (and 5 more under 2 upstairs!), but it was great!

The Snack:
While I read the book, the kids had a Build Your Own Snowman snack. I used:
Some of the foods were new for some of the kids, but they all made some tasty-looking snowmen! 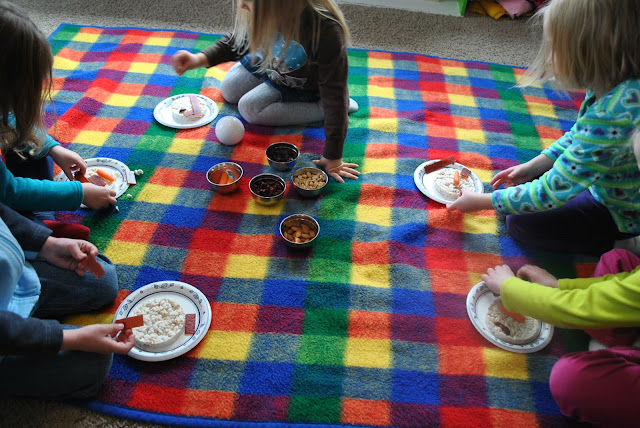 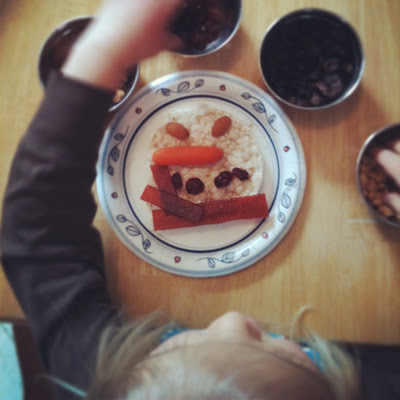 We also read about where snow is made: 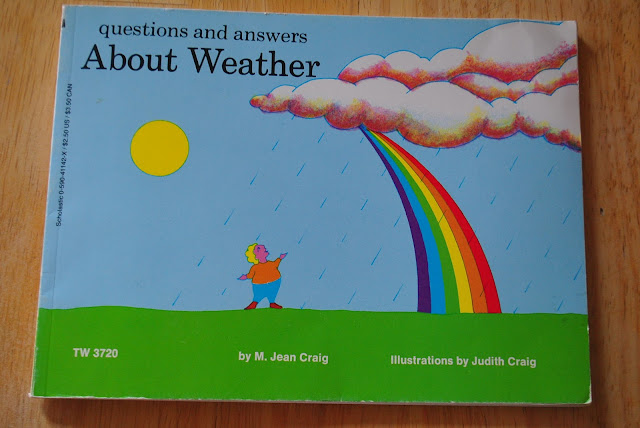 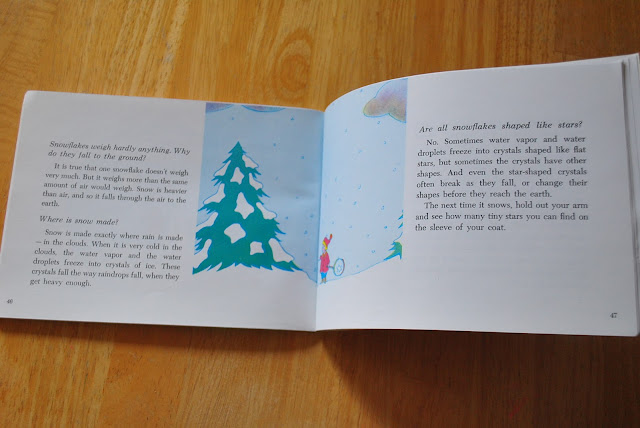 Here are the activities we did to go along with the book:

(Sadly I don't have pictures of these first two activities, we were too busy playing along!)
Walking like Peter: We got in a line and walked around the living room with our toes pointed out and our toes pointed in, then we dragged our feet and pretended to drag a stick.

Snow Angels: There was snow outside, but it was REALLY cold that day so we stuck to making snow angels inside. All of the kids picked a spot, laid down and made snow angels on the carpet.

After the angels, we moved into the kitchen. Each kiddo had their own cookie sheet/tray to define their space (and if I'm being honest contain messes!) at the table and another mama and I rotated the activities in and out.

Snowman "S" dot sheet from PreKinders: The purpose of this was to dot the items that started with S and they all got the hang of it pretty quickly. Honestly, the only one that stumped them for a minute was seahorse. The rest they were in unanimous agreement about! After they did the items, they dotted a bit more for fun! 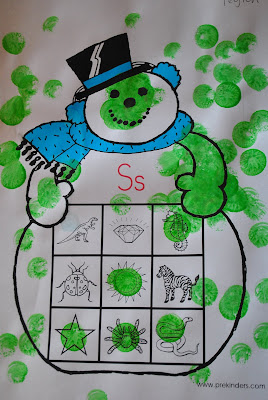 Snowman grid from PreKinders: Using the die, each child rolled and then put the corresponding number of cotton balls on the snowmen. We've done this before by ourselves and I have to say I think Sweet P had a lot more fun/interest doing it with other kids. 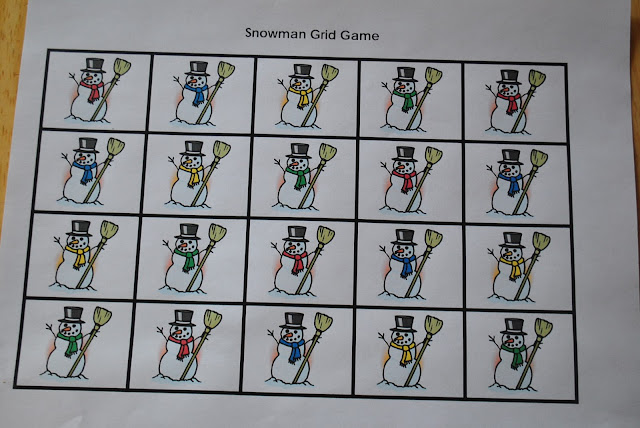 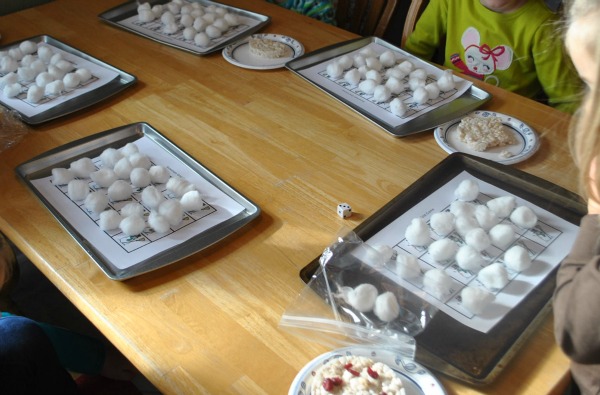 Snowy Day scene: I saw this on a few different blogs and thought it was a neat project. They really enjoyed tearing the paper, but in hindsight I probably would've given them a smaller piece of white paper because they wanted to cover their entire piece of blue paper! :) The stamps and gluing were a big hit, and I thought it was neat to see how different each of their scenes turned out. 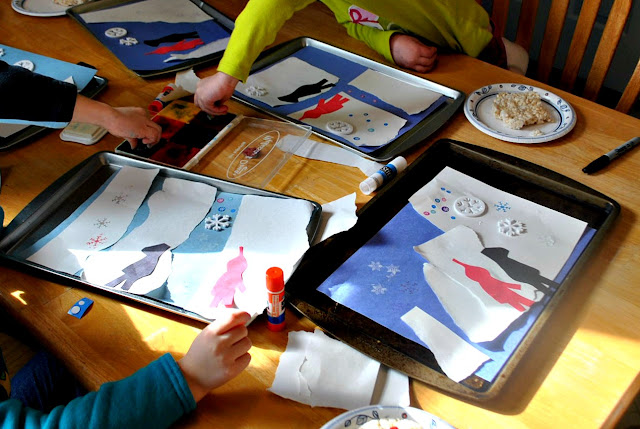 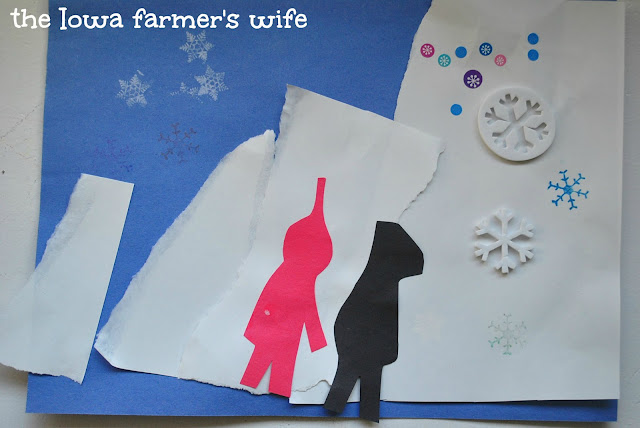 Snow Play dough: I had 5 animals and several Playmobil people to use to make tracks in the playdough - they also used little plastic snowflakes to make snowflake prints. 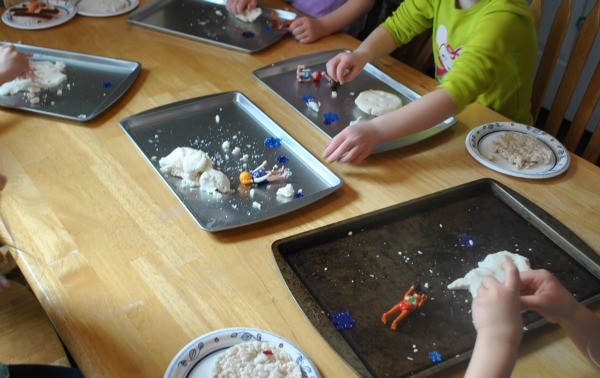