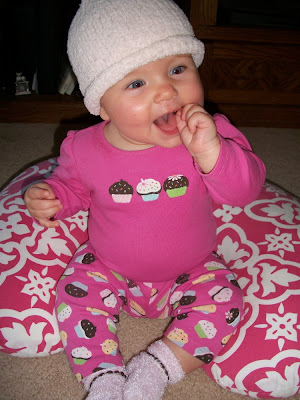 Probably not the best title for the blog, but it'll do.
Approximately a year ago, the Farmer and I saw Sweet P for the first time. She was roughly an inch in size and I was 11 weeks pregnant. I have one of the photos of her in a frame and marvel at how such a tiny thing can be so detailed. About a week before that we had our first appointment with the midwives and found out our due date was May 2nd (which is now Sweet P's birthday). And 6 weeks before that I peed on a stick and handed it to my husband so he could be the first to know.
"What does it say?"
"Preliminary results say, "Yes."
And the whirlwind began. The point to all of this is that around this time last year I received a package from Gammy (my mother). It was a gift for the baby (who at this point was "the baby" because we didn't know if she was a he or a she, yet). I opened it and there sat a tiger costume. This costume was partly for Halloween wear and partly for her to wear to an LSU outing. I wasn't sure she'd get the chance to do the latter.
I was also a little bummed that the Halloween costume choice had somewhat been decided for me. Thankfully, we have more than one Halloween party to go to so I reasoned that it was perfectly fine to buy another costume. Or 2. So now Sweet P will have the chance to be not only a tiger, but a skeleton and a pumpkin. (Oh, there will be pictures). I figure this is the only time in her life that I get to decide the costume (because I'm sure from here on out she will be the boss of the costumes) so my first choice was a pumpkin. The skeleton is just a pink onesie with a skeleton on it.
And she'll definitely get to wear her tiger costume for what it was meant for at Auntie Kandida's swim meet next weekend. Yes, that's right. Sweet P is going on another flight. I'm a little nervous for this one because she's a bit more mobile and opinionated as this point. But I'll keep you posted.
And as far as I'm concerned, there's not much cuter than a baby in a Halloween costume. So what are you (or your kids) going to be for Halloween this year?
Posted by The Iowa Farmer's Wife