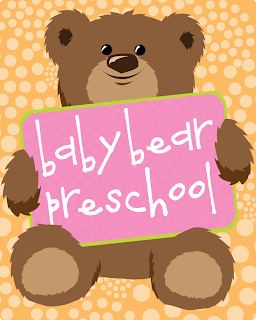 Time to get caught up with Baby Bear Preschool!

First off: Letter T! We did two weeks of Letter T because I found/came up with so many great tree activities! Plus the tree theme fit perfectly into autumn/fall, too!

You'll notice that in most pictures Sweet P is in her fairy costume or her jammies, that's one of her favorite parts of homeschool preschool - getting to wear costumes and jammies! 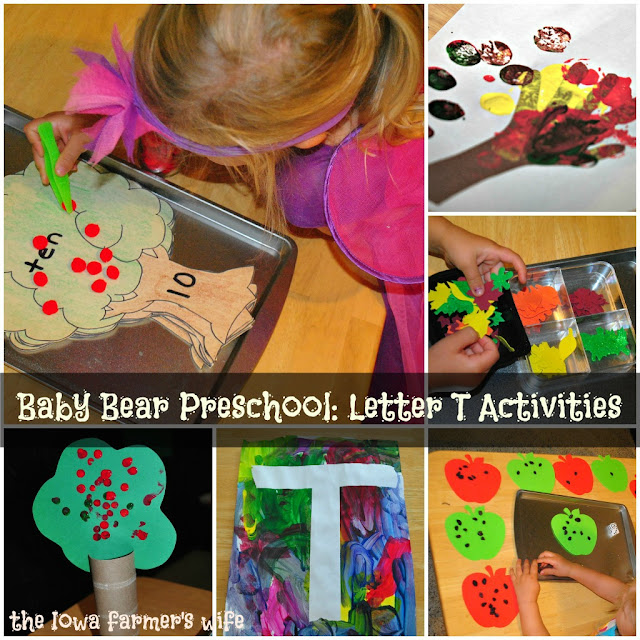 Verse: Thank the Lord for all the glorious things He does. Psalm 105:1
Song: We didn't really have a song for Letter T, but danced to all sorts of music!

, Thou Shalt Not Steal in My ABC Bible Verses: Hiding God's Word in Little Hearts

, and Timothy's story in A Child's First Bible

Apple Tree Number Match: Last year a garage sale down the street was selling preschool materials that the seller had made. I snatched up a few gems, including these numbered trees. They actually go with a set of dogs with dots on them, but I left the dogs in the envelope and we used the trees with red pompoms (apples!). Sweet P doesn't love to count so she tends to get tired of these types of activities quickly. I've learned to do high numbers first so that she gets 9 & 10 out of the way and has 2 & 1 last. You'll see in the top blog picture that she started with tweezers. She got rid of this pretty quickly and used her fingers instead. She can use tweezers, she just knows fingers are faster!

After she'd put all the apples on the trees, I moved them into a line on the floor. She and Beary grabbed baskets and then went to the apple orchard and picked apples! This was by far her favorite part. 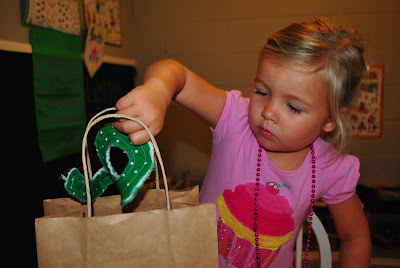 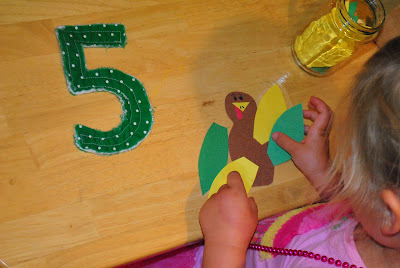 Turkey Feather Counting: I made a little turkey and ten feathers out of construction paper and placed her quilted numbers in a sack. She pulled out the numbers one at a time and put the appropriate number of feathers on the turkey. I think she probably would've liked it more if I'd made 9 turkeys and she got to glue on the feathers because she kept asking me if were going to glue them. She slid the feathers off after each number and thought it was pretty funny when we did zero! 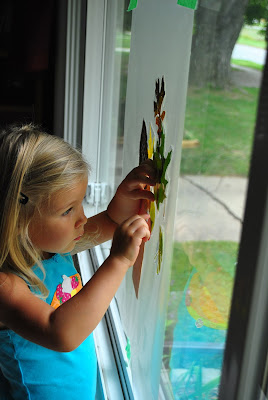 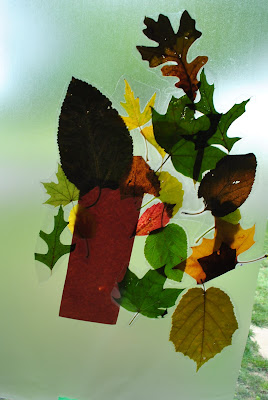 Contact Paper Tree: We went on several leaf hunts during our T week and after each walk, I laminated the leaves we picked up until we had several of each. I explained the activity, gave Sweet P the materials and she set to work. She said, "Some of the leaves are falling off the tree." We talked a lot about falling leaves so any time we talk about them she says, "Oh is it fall?" 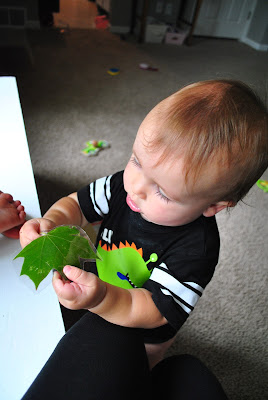 Sprout examined the laminated leaves too! He loved the way they felt and since they were laminated it didn't matter if he tried to taste them (which he did, of course!). 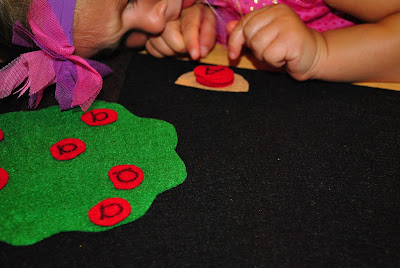 Felt Apple Tree Sort: I made this felt game last year to go with Letter A, but it fit in great with our tree theme. She did it several times, stacking up all of the capital letters and then moving on to lowercase. 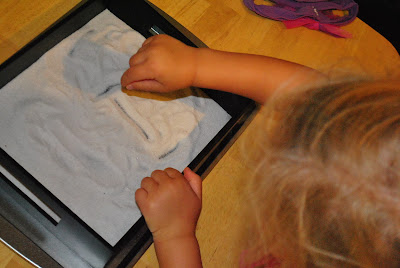 Writing in the Sand: This was the first time we've done sand tracing and she had a ball! She did capital T and lowercase over and over, and then just drew in the sand. 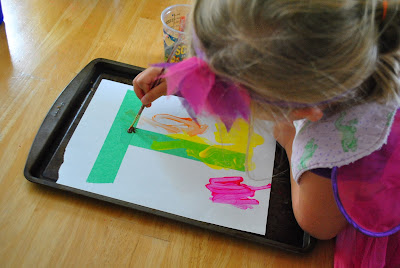 Letter T resist painting: Again, our first time to resist paint and it was a huge hit! Sweet P painted all over the page and then we hung it up to dry. We both thought it was pretty cool when she peeled off the tape later and the white T showed up! The finished picture is in the collage at the top of the post. 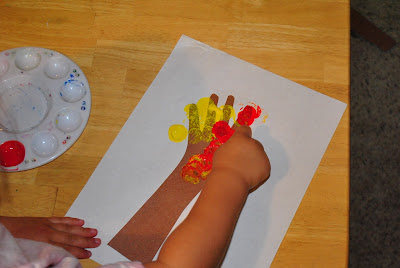 Cork painting! So fun! Inspired by The Picky Apple. I traced her hand on a brown piece of construction paper, cut it out and she glued it to a piece of white paper. I only had 1 cork, so she used the same one over and over. It fit perfectly into the paint dish and she had a blast! She also said she was making several leaves falling off the tree in this picture. I forgot to take a pic of the finished product and am too lazy to go find it to do it now, but you get the picture! 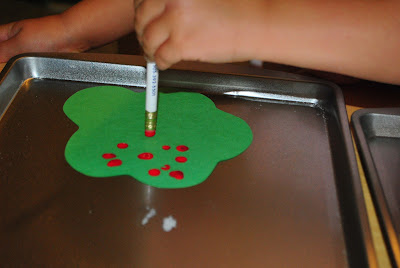 Eraser Stamping TP Tree: (See the collage at the top of the post for a pic of the finished craft.) I pinned this verrrry early in my pinning days. After cork painting, I grabbed a pencil and she made apples all over the tree. I cut slits in the TP roll and helped her fit the top of the tree into it. Love how it turned out! 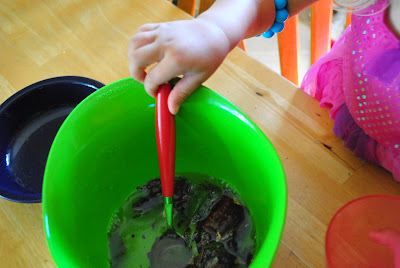 Leaf Soup: After a nature walk, she took all the leaves we weren't using for our contact paper tree and made leaf soup! I gave her a cup full of water and she went to down mixing and pouring. 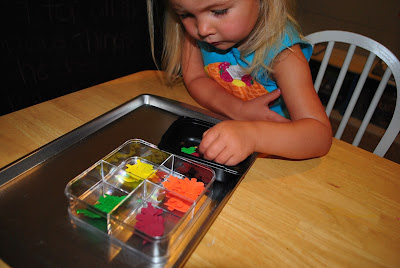 Sorting Leaves by Color & Shape: These leaves are from the $ Tree and come in 4 colors. She sorted them into the clear plastic container by color and then again by shape. 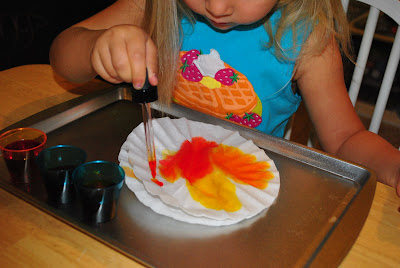 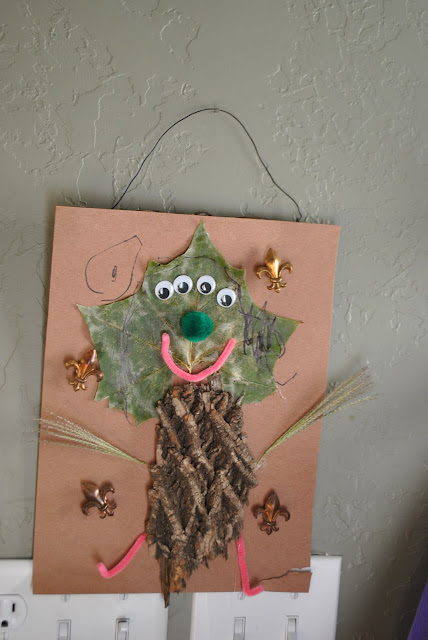 '
We went on a walk to a playground when Gammie visited and came home will sorts of nature pieces. Actually, as she picked up pieces she said "This can be the head." and a Leaf Girl was born.  I guess it's more of a leaf monster! 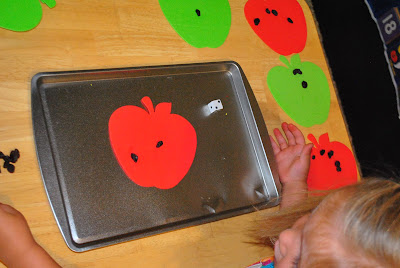 Apple Seed Dice Game: These foam apples are from Target's $ Spot. Sweet P's tray had the apples, a box of raisins (seeds) and dice. She'd roll the dice (we started with 1) and then add the appropriate number of raisins. This lasted awhile, until she decided to eat the seeds! 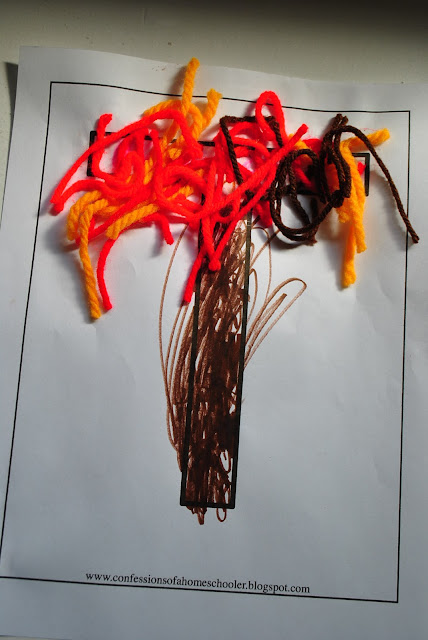 Yarn Tree: Inspired by 3 Dinosaurs using a Letter T worksheet from Confessions of a Homeschooler. After coloring the trunk, she went to town with 3 colors of yarn. I couldn't get it cut fast enough! 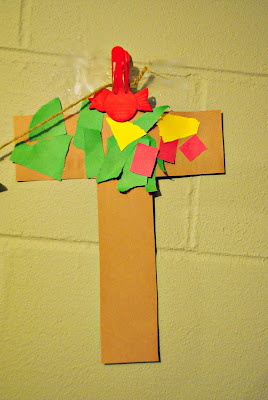 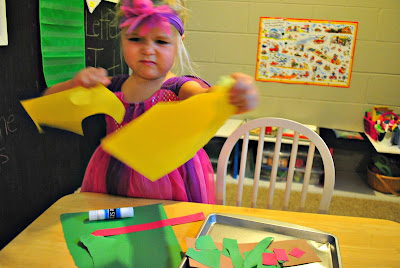 Tear Leaf Trees: Can you tell she's really into the tearing?! Love that picture! Her tray had scraps of green, yellow and red paper, along with a brown letter T and a glue stick. She did several pieces and then announced that she wanted to hang it up. 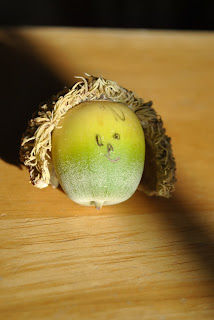 Acorn Lady: Gammie found these pieces of acorn on our nature walk and we glued them together to make a lady! Sweet P drew on the face with a marker. Too funny!


Other activities:
Center Grove Orchard: We went to the orchard TWICE during our letter T weeks and it's always a blast!

Food Bank: To go along with being thankful this week, we thanked God for our abundance of food and took food to a local food bank. We also dropped off several toys the kids no longer play with at the Salvation Army. We talked a lot about giving during this week as well.

Words of a Preschooler: Auntie Rosita volunteers at a food bank twice a week so she talked to Sweet P via Skype about working there and what she does. Well after we took food to the food bank, I told her about a girl we saw loading a truck and said, "See she's volunteering like RoRo does." Sweet P replied, "Yes, RoRo goes to the food bank because she doesn't have enough food to eat." Whoops.