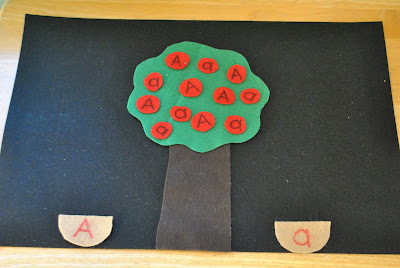 I love felt. Can you tell?

Last week we focused on the letter Aa and watched letter A on Starfall (several times). At the end of the letter A clip, there is a "game" where you drag the capital A's in the tree to the capital A basket and the lowercase a's to the lowercase a basket. This works, but Sweet P points while I do the dragging for her since we don't let her touch the computer. After some thought, I figured out how to make it Sweet P friendly and more interactive for her. Here's what I came up with!

Cut out a shape that resembles the top of a tree (a circle works fine) from the green piece of felt. Cut a trunk out of the brown piece. Cut several circles out of the red felt (I did 12 and they do not have to be perfect circles. They are apples, remember?!). Cut 2 half circles out of the beige/light brown felt (these are the baskets). 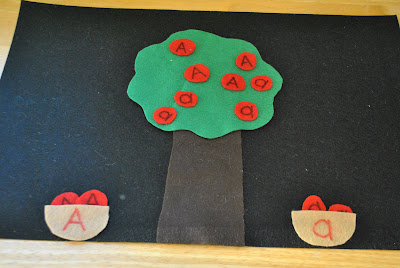 Sweet P loved the game and knew exactly what to do after watching the Starfall version. This was so easy to make (and cheap since I had the stuff on hand) and can be used again and again!
Posted by The Iowa Farmer's Wife