My husband is a huge Sponge Bob fan. Or at least he was long enough for us to have the 2nd and 3rd season on DVD. So it seems only fitting that when Sweet P is fussy she gets called "Crabby Patty." For those of you who are unfamiliar with Sponge Bob, there is not a character named "Crabby Patty." It is the delicious sandwich served at the Crusty Crab, the restaurant where Sponge Bob works. I'm still not convinced that Sponge Bob is a show for children, but it can't hurt calling her "Crabby Patty" when she is being just that. CRABBY.

If I haven't mentioned it before, I will do so now. My daughter sleeps at least 9 hours a night. There. I said it. Please don't be jealous. You don't have to be, because I am about to tell you why she does it.

I was walking one day with my dear friend K and her daughter (who is 3 weeks older than Sweet P). I was telling her that Sweet P does okay (Fine, I'll admit it was better than okay) with sleeping. She was sleeping about 5 to 7 hours (which is better than okay) and waking up to feed and then going back down and once more before waking up for good. K then told me her daughter sleeps between 10-12 hours a night. Um, excuse me? Did you just say your newborn sleeps 10-12 hours a night?

I was nervous at first, to say the least. But then she told me how. Her daughter slept in a sleep sack, except she kept her arms inside the sack. I didn't have a sleep sack small enough for Sweet P, but I did have a fleece SwaddleMe blanket that hadn't been used, yet. Up to this point (this was around the time she was 9 weeks old, she is now 14 weeks) I had been swaddling her, but leaving her arms out because she didn't seem to like them in the swaddle. She was also completely out of the swaddle in the morning because she was getting strong enough to kick and punch out my swaddle job. 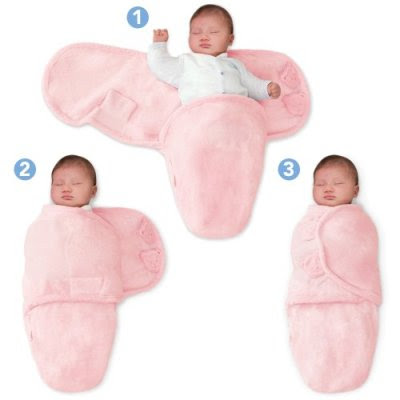 That night I tried out the SwaddleMe blanket. We put her to bed around 9:45 and when I woke up at 5am I checked her because I was a little freaked out, but she was still asleep (and breathing!). She slept until 8:15am. I was hooked, we do not sleep (or go anywhere) without the SwaddleMe. Sweet P goes to bed about 9pm and wakes up for the first time between 6 and 7am. She will feed and go back down for 1-2 more hours. Some nights she will sleep longer, others a bit shorter, but she does not sleep less than 8 hours a night. Therefore, I cannot complain about lack of sleep.

I am sharing this with you because if you have a newborn, swaddle them!!! I don't care if they don't like their arms swaddled. Mine didn't either. Now, when she's fussy before bedtime, we put her in the swaddle and she knows it's time for bed. She might still fuss a bit once she's in it, but it seems to calm her down a little. If you don't have a newborn, buy this for someone you know who has a newborn! The SwaddleMe blankets come in both fleece and cotton. We have fleece because it was given to us as a gift so she doesn't sleep in pajamas, just the blanket. It also gets pretty cold around here in the winter, so I'm pretty sure the fleece will come in handy. I can tell you are still skeptical, but at least give it a try. And if the worst thing that happens is that your baby sleeps 9 hours, I'll tell my friend K you said thank you.

Edit: I should also mention that Sweet P gets in at least 6 feedings during the day and has enough meat on her bones to sustain her through the night. Smaller babies may still need to feed throughout the night and there are also babies that need that night time feeding. However, I still suggest trying it out once you feel comfortable with your baby sleeping through the night.
Posted by The Iowa Farmer's Wife