As I mentioned in my previous post we recently returned from a trip visiting Gammy and Auntie Rosita during which my 3 month old and I survived not 1, but 2 plane flights. I was reeeeeeally nervous about flying with her for a few reasons.

1) I have so been that rude person that rolls their eyes at screaming babies on airplanes hoping that they will please, please, please be quiet. I thought for sure I was done for on this trip with my own child.

2) Sweet P is not so fond of sitting. She very much enjoys it when you are standing, walking, bouncing, etc. Not so much while you are sitting.

And
3) Sweet P had not pooed (is that a real word?) neither the day before, nor on the 3 hour ride to the airport. (Don't worry, we don't live in some remote city, Southwest just doesn't fly in and out of Des Moines).

So when the Farmer dropped us off at the KC Airport I was pretty scared. I had learned a few tricks of the trade because I did what every smart 21st century mom would and googled for tips on flying with an infant. Some of them I went with, others I left behind. I absolutely did NOT want to lug my infant seat around the airport. Have you seen pictures of my infant? Have you heard me say she weighs over 15 pounds? Have you carried her up more than one flight of stairs in the infant seat? Yeah, so was not taking it on the plane or gate checking it. I also didn't want to check it because I'm not sure if you've flown in past ten years, but have you seen what they do to your luggage? Um yeah, not checking the infant seat that would need to be in one piece once I reached my destination. My mom decided to buy one and that solved my problem. Thanks, mom. You have no idea how much trouble that saved me.

So here's how the flight there went.

This is what I had with me: a duffle bag (I was returning it to my mom, but realized I better pack an additional duffle bag inside of it because I'd probably be bringing stuff back), a suitcase, a diaper bag, sling and Sweet P. I got to the ticket counter and gave them my ID and Sweet P's birth certificate. At first, I thought the birth cert. was only to prove she was under 2 years old, but the more I thought about it, I realized they probably wanted to make sure it was in fact my baby and I wasn't trying to smuggle her across state lines. The KC airport set up is really, for lack of a better word, dumb.

Once I got to security, I quickly pulled her out the sling, pulled off the sling and took off my shoes. This process actually went really smoothly. I didn't even try to keep her on to go through the x-ray I figured they'd make me take it off anyway. Changing her in the bathroom made it easy to just put the sling back on. One complaint I have about Southwest is that they do family boarding between the A and B boarding groups. That means 60 people get on before those with small children. Anyone who flies Southwest knows that all the single flyers end up sitting one to a row when they get on leaving no room for families to sit together. This doesn't really matter now because it was just us two, but it might bother me down the line when I'd like to sit with her and the Farmer. I also hoped to sit toward the front which didn't happen either because all the A's sat at the front leaving the middle seat open between them. The middle seat is not the best position for a lady with a baby. I know, I know, I should have just gotten an A boarding pass, but both times I ended up with B (and I checked in at home!).

I truly think she would have slept the entire flight had the flight attendant not asked me to take her off for take off and landing. Can someone please explain why it is better for me to hold her in my hands rather than have her tightly against my body. I don't get it. Of course when I took off the sling she woke up. I nursed her during take off and as soon as we were in the air-BOOM. Poo. Lots of poo. Lots and lots of poo. And no where to change her. The poor kid had to sit in her poo for the entire flight, but luckily there were no leaks and I changed her as soon as we got off. I also nursed during the landing and she was really only fussy at the end of the flight. Hallelujah. 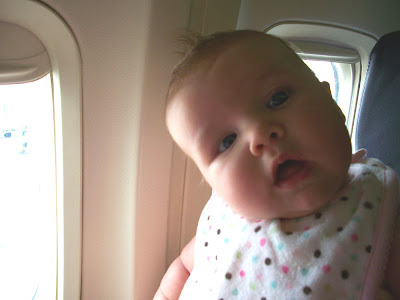 Hey Ya'll, I'm on an airplane!
The return flight had a stop so we were on the plane for 4 hours. While she wasn't ever full blown crying, this was not the ideal situation. Again, she pooed as soon as we took off (must've been the change in air pressure) and so I had to wait until we stopped before I could change her. This time, however, it started to leak out of her diaper. Besides being utterly disgusting, it was not a life threatening situation so I did what any good mom would do and wrapped a burp cloth around her. I ended up changing her on the 2 seats next to me before the 2nd leg of passengers got on. A wonderful grandma sat next to us on our 2nd leg. She actually WANTED to sit by us! We were fortunate to have a seat between us that flight and could spread out a bit more. Again, she was really only fussy on the landings, which I think was mostly due to her ears.

So what did I learn? Take a diaper bag with a lot of pockets. You don't need a bunch of books or toys because at 3 months old she is most content staring at your face or the person sitting next to you. The magazine in the back of the seat in front of you was a great way to keep her occupied. Here is what was in my diaper bag:
One bib; one burp cloth; one toy (which I didn't get out); nursing cover; one blanket; one book (that I didn't need); your wallet; your baby's birth certificate; 10-15 diapers; an entire package of wipes; Wet Ones; a baggy with children's Tylenol, chapstick, antibacterial gel, bandaids, fingernail file and kleenex; a camera; 2 onesies; changing pad; and a snack for me. I bought water once I was past security.

Other things to include: Sweet P doesn't take a paci, but if your baby does you want to bring that. Also, a bottle with whatever formula you need. This type of liquid is okay through security and they shouldn't make you pour it out. If they do, they are wrong. The only other thing I might bring would be a scarf or something for myself if the flight was going to be cold.

FYI: They no longer have blankets or pillows on Soutwest due to the Swine Flu.

And lastly, don't try to set your baby on the tray table by any means because a flight attendant will come around, tell you to get the baby off the table and then put the table up.
Posted by The Iowa Farmer's Wife