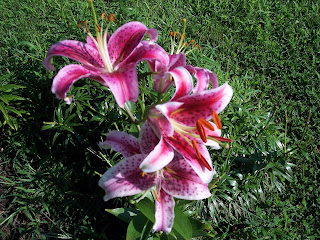 Clearly, I am not near as on top of this as my husband. I haven't even sent out an email with the blog URL so right now I'm just writing to myself, I guess. It is Sunday morning and Heath is at the farm (so expect a blog entry from him tonight) so I am home alone. I just finished cleaning the house (Heath helped for awhile, but then I could see how badly he was "itching" (pun intended) to go to the farm so I let him go), for those of you who know what a neat freak I am this should not come as a surprise. While we live in a small, two bedroom apartment, it took me 2.5 hours. And that was with Heath's help!

To catch you up on a few things we did this weekend:
1. Friday I attended a CPR/First Aid class should the chance come that I get a fitness based job. It's probably something most people should do and it was a review since I've had it before so it wasn't too bad. I was, however, the youngest person in the room by at least 10 years and one of two females. The other female left after lunch so there I was with 7 middle-aged men and up. At least the instructor was a female that looked about my age. It wasn't half bad and I learned a lot. I even learned about Poison Ivy, Poison Oak and Poison Sumac. Interesting seeing as how my husband had acquired a posion ivy rash the day before.

2. Friday evening Heath and I went to watch a local artist play at a coffee shop called Ritual Cafe. He was pretty good, his name is Chad Elliot and it was folk music. And they had pretty good coffee. They had vegetarian fare, but Heath and I are trying to eat at home more often so we ate before we came. We did eat a vegan peanut butter cookie. It was a little different, but not half bad.

3. Saturday morning we took our regular trip to the Farmer's Market. We have decided to make this a tradition and make a list of what we need before we go. Our purchases yesterday include: Kettle corn (made right there with a kettle), granola (the best ever from Big Sky bakery), sweet corn, watermelon, peppers (5 for a dollar!), okra (not sure how this will pan out) and Heath found some tomatoes and onions while I was getting my breakfast burrito. Heath had another Pupusa and we also bought a bouquet of fresh flowers. We spent about 2 hours walking around (there were more vendors yesterday) before heading home.

4. Saturday afternoon we decided to try a different Aspen (the gym we belong to) and went to one a few miles away. It was definitely older and the weight room was in what I'm guessing it a basement. It was huge, but smelled funny and there were at least 8 tennis courts (all indoor!). While working out we were doing ab exercises where your partner throws a weighted ball at you and you crunch from side to side. Here is the exchange that occurred while it was my turn to do the crunching:
Me: 2 more
(After two more, I sat up) Heath: Are you done?
Me: Yes (but for some reason I brought my hands up because I thought he was going to throw it again, but I brought them back down). Bad idea.
BONK! Heath threw the ball again, but I think he had an idea that he was doing the wrong thing, because it didn't feel like it had as much force behind it, BUT it hit me smack in the head before Heath grabbed and threw it to the ground.
Heath: ARE YOU OKAY?!
I was fine, just a little dazed for a minute, but at least it wasn't that heavy. It was only an 8 lb ball and he didn't throw it very hard. Embarassing? Yes.
After we left the gym we drove out to Gray's Lake to run. We ran/walked for about 45 minutes while we people watched. Walking the lake is perhaps one of the best people watching places there is. There are a lot of people with dogs in Des Moines and a lot of people who like to work out. There also seems to be a large amount of people with weiner dogs and Heath loves them.

5. After our run we came home to grab dinner and shower before going to church. We decided to try something different that we'd found online called Downtown Church. It was interesting, but the congregation may have been a bit young for us. It was in an old building with folding chairs and there was a screen and instruments for the band at the front. The music was great, but I think we felt a little bit too old to go back. We were hoping for a young crowd, but maybe we're older than we think. :) We had ice cream at a place called Van Dee's afterward. Des Moines has several malt shop/ice cream places. We have been to two. One is called Snookie's, the other Van Dee's. Heath had a caramel sundae and I had a dip cone that was dipped in a Krunch Kote, but tasted like butterfinger, it was AWESOME! They also but little sugar eyeballs on your ice cream. Weird, but also pretty funny.

6. The last thing I'll post for today is how often Heath and I play Boggle. I believe the reason we play so much is this: Heath can't beat me. :) So we are often playing "rematches" so that he can try. It's a lot of fun, he's even decided that he should have a handicap when we play. I'll keep you posted on whether he starts winning. :) I have to relish in the fact that I win, because it's one of the only games at which I am capable of beating him.

I have a second interview for a job tomorrow. I'll keep you posted.
Posted by The Iowa Farmer's Wife