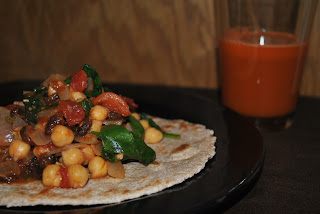 4 more days! (including this post)
Day 4 brought with it a nice little ice storm here in the midwest. Nice and ice do not go in the same sentence very well...even if they do rhyme. Needless to say this little family did not leave the house. Classes on all counts were cancelled so we stayed home snug as a bug. Unfortunately, somewhere in there Sweet P started to cough. And sniffle. And snuggle. All signs that she is under the weather (because she is definitely too busy to snuggle these days).
But the sickness didn't kick in until the afternoon and I made our recipe for lunch (because I was supposed to teach last night, but school was cancelled). I knew what I was making needed some sort of bread and because I didn't want to make naan again and didn't have soy flour to make pitas, I found a recipe for Whole Wheat Tortillas.
The Recipe(s):
Chickpeas with Onions, Spinach & Raisins (no joke, that's the name of the recipe)
Whole Wheat Tortillas
Carrot, Red Pepper & Celery Juice (I can't take credit for this because The Farmer made it, but it's going in here anyway)
The first recipe came from the "Almost Vegetarian" cookbook while the whole wheat tortillas came from the website above. The juice recipe is literally just those three items. Not much of a recipe.
For the directions on the tortillas, please visit the link. They are SO easy. We are never buying store whole wheat tortillas again for 2 reasons. 1) They are stupid expensive. 2) They taste like cardboard and glue (but we buy them anyway!). Anyway, I rolled the dough into a ball and let it rest for 15 minutes and then pulled it into 8 tiny balls, rolled them out and then cooked them on a griddle for 30 seconds on each side.

See. SO easy.
Chickpeas with Onions, Spinach, & Raisins
What you need: 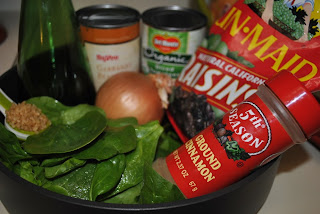 1 tbsp olive oil (or as much as you think you need, I just drizzle and eyeball it)
1 large onion, chopped
1 tsp ground cinnamon
2 medium fresh tomatoes or canned, peeled, seeded and chopped (I used canned since it's not tomato season)
2 c fresh baby spinach leaves, washed
2 c cooked chickpeas (again, I used a 15oz can)
1/2 c raisins
1 tbsp minced garlic (the recipe didn't call for this, but I put garlic in everything)
Heat the oil in a nonstick skillet over medium-high heat. When hot, add the onion and cinnamon, reduce the heat to medium, and saute, stirring often, until the onion is soft and limp (about 1o mins). 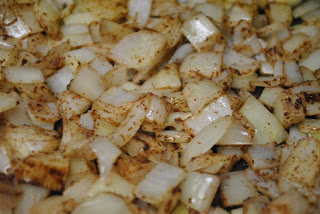 Add tomatoes and continue cooking about 5 mins. Stir in the spinach, chickpeas and raisins. Continue stirring until the spinach wilts and turns bright green, about 3 minutes. 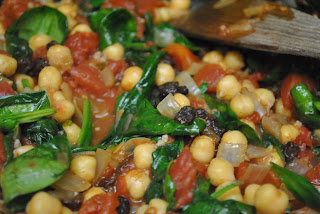 Carrot, Red Pepper & Celery Juice
What you need:
8 carrots (real carrots, not baby carrots...quit eating those by the way, they are washed with chlorine)
4 baby red peppers
2 stalks of celery 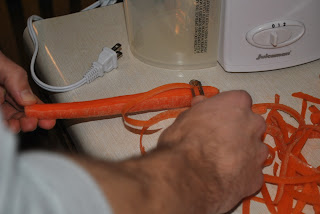 Peel carrots, cut stem off red peppers and trim celery. Put ingredients into juicer. It does the rest.
The Results:
This recipe was SO easy that I was skeptical. While it was good, the canned toms and chickpeas tasted, well, canned. I think with cooked chickpeas and fresh tomatoes it could have been much better. That said, it was also similar to things we have on a regular basis so it wasn't as original as I had hope. It was, however, fast and still tasted good. This would be a great meal to make on a night when we didn't have much time. Even the tortillas didn't take long! And one more thing, if you're thinking "raisins and onions? and spinach? and chickpeas?" Trust me, it tastes better than you think.
The Grade:
Chickpeas mix: B+. Again, it tasted like something I'd made before and didn't taste as fresh as other things we've had.
Tortillas: A-. Because they aren't as good as some homemade tortillas we've had (how can I compete with white flour and lard!!!), but WAY better than the store bought ones.
Juice: A-. While it was good, the veggies weren't fresh from a garden (you could tell because they weren't very juicy) and I thought the red pepper made it smell funny.

What I'd do next time: Obviously use fresher produce. But for that I'll have to wait for this summer. I'll definitely be doing another Recipe Challenge then!
Tomorrow's post: Pumpkin Pancakes
Posted by The Iowa Farmer's Wife