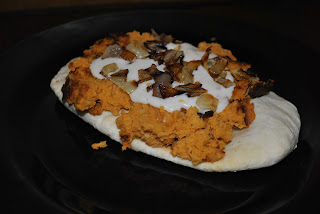 Last night's recipe was, in a word, authentic. I'll ruin the suspense and tell you now that the Farmer gave it an A for authenticity. But if Y were a good grade I'd give it that. For YUM. Don't let the unfamiliar words in the recipes scare you. Try it. You'll like it.
NOTE: this is a long post due to 3 recipes.
The Recipe(s):
Baked Falafel with Sweet Potato
Tahini Sauce
Naan
All 3 recipes are from the cookbook "Almost Vegetarian Entertaining" by Diana Shaw. This book belonged to my brother-in-law and somehow made it to Iowa to live with us.
What you need:
Baked Falafel with Sweet Potato 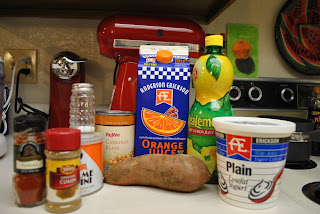 1 medium sweet potato (I used 2 small)
2 c cooked chickpeas, rinsed and drained (I used one 15oz can)
2 tbsp tahini (can be found in your local grocer, you just have to look hard. Really hard.)
2 tbsp nonfat plain yogurt
1 tbsp fresh lemon juice (I used the kind in a bottle)
1 tbsp fresh orange juice (again, out of a container)
1 garlic clove, crushed and minced (used 1 tbsp of minced)
2 tsp cumin
1 tsp paprika
Pinch salt
What I did:
Heat the oven to 450˚.
Wrap the sweet potato(s) in foil and bake about 30 mins (until soft). Leave oven on. Unwrap potato(s) and let cool. When cool enough to handle, peel and mash with a fork (not extremely necessary because you're putting it into a food processor, but hey).
Place the sweet potato, chickpeas, tahini, yogurt, lemon juice, orange juice, garlic, cumin, paprika, and salt in the work bowl of a food processor or blender. Pulse to make a chunky paste. 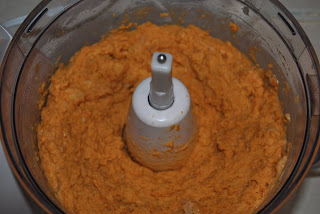 Pat the mixture into 6 nonstick muffin tins and bake until firm on top, about 20 mins (middle will be soft). Run a butter knife around each and turn out of the muffin tins (this did not work for me. I had to scoop them out with a spoon). 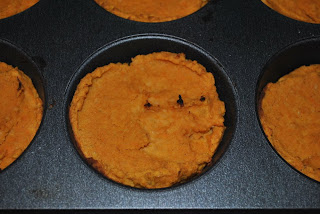 Mash on a piece of pita (we used naan), drizzle with tahini sauce and top with onion and sprouts (we only used onion).
What you need:
Tahini Sauce
1 c nonfat plain yogurt (used lowfat)
1 tbsp tahini
Juice of a lime (I used lemon out of a bottle)
Generous pinch of cumin
Coarse salt to taste (I used sea salt)
What I did:
In a small mixing bowl, combine the yogurt, tahini, lemon juice, cumin and salt. Whisk well to blend. Can store in fridge while finishing or keep out to use as an appetizer.
What you need:
Naan
1 tsp active dry yeast
2 tbsp warm water
1 tsp sugar
1/2 c nonfat plain yogurt (again, used lowfat)
1/2 c buttermilk
3 c all-purpose flour
1 tsp salt
What I did:
Dissolve yeast in warm water along with sugar. Let sit until creamy with small bubbles (5 mins).
In a mixing bowl, combine the yogurt and buttermilk, stirring until smooth. Place the flour and salt in a Kitchenaid mixer fitted with dough hook. Turn to 1 to combine. Add the yeast mixture and yogurt mixture, processing until dough forms, 5-7 minutes.
Remove the dough from the machine or mixing bowl if necessary and knead on a lightly floured surface until it is soft and springy, about 7 minutes. Place in a clean ceramic (or glass) bowl, cover with plastic wrap and let rest in a warm, draft-free place until doubled (about 2 hours). I made the dough, put it in the laundry room and headed to Zumba class for an hour (that's why there aren't pics of me making the dough...I was in a hurry!). It was close to ready when I got back.
Heat the oven to 500˚. Turn out the dough, press it down and divide into 8 pieces. Roll each piece into a ball. Flatten a ball of dough with your hand, roll into a 8 inch long oval with a rolling pin. Cover loosely with plastic wrap until you complete the batch, layering between each piece of dough as you go. (I started baking them as I went and only had to use this step once). 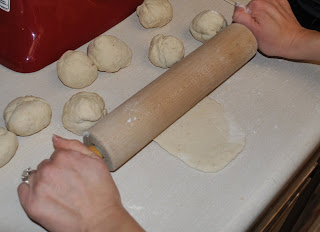 You can use a baking stone, but here is what I did...Place 3 or 4 naan on a cookie sheet and put in the oven. Bake until they puff up and turn golden brown on top (about 5 mins). Remove and repeat with remaining naan. If you are not serving immediately (or finishing them), transfer the naan to a damp kitchen towel (one you've rinsed and wrung as dry as you can), stacking them on top of one another. Fold the towel over the naan, then wrap in foil (I ran out of foil making sweet potatoes so I used a HOT/COLD bag we have). They will stay warm and pliant for about an hour. SO TRUE! The Farmer was really impressed with this.
The Results:
These recipes made me feel like a real cook. There were a lot of steps and it took awhile, but now that I've done it once I think it'll be easier next time. The naan was so so so good. We tried it with the tahini sauce before the falafel was done. Pure heaven in a piece of bread. 2 were gone before we sat down for dinner. 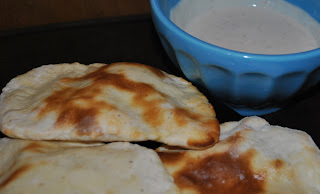 The Grade: a solid A. The reason it's not an A+ was again the texture of the falafel. It could have been a bit crisper. I'm not sure if it would have been different if I'd used a smaller muffin tin. I used the large 6 muffin tin. The Farmer liked it so much he ate 3 of the falafel!
What I'd do next time: I might add spinach to either the falafel mixture or to top the naan. We ate a lot of carbs last night! Overall though, this was a terrific meal. To quote the Farmer, "This is restaurant quality." Can't beat that.
Posted by The Iowa Farmer's Wife