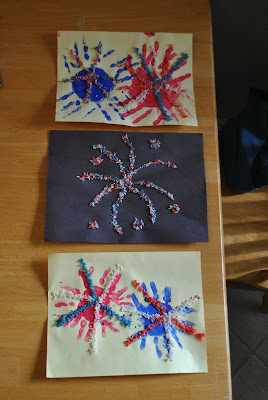 Yes, I do realize that 4th of July was a month ago, but I've been a bit behind on the blogging (if you hadn't noticed). But I'm making up for it now!

We made these fun little creations while Blair was visiting and what fun we had! I think they turned out pretty neat and even though it was pretty messy (aren't all toddler activities messy?), it was a great sensory activity for Sweet P.

I painted one of Sweet P's hands red and the other blue and stamped them 4 times a piece to create the background of the firework (older kids can paint their own hand). Then, I drew one line of a glue at a time and had her sprinkle the rice on top. This worked well, but doing all the glue at once would work as well. We used separate colors, but realized later that the mixed rice looked so much cooler!

Sweet P's is on the bottom, Blair's is on the top and the middle firework was made by Gammie and Blair with leftover rice.

I found several tutorials for colored rice, but found that simply adding food coloring worked best. I added water to the blue and it took too long to dry (we ended up putting it outside where it baked dry in about 2 seconds). I just added food coloring and mixed until the rice was coated for the red.

How to make colored rice:
1/4 cup white rice
3 to 4 drops of food coloring