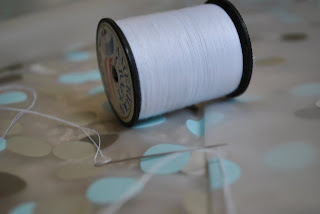 So I have said before that Auntie Rosita received most of the creativity in our family, but eeeevery once in awhile I come up with something that just makes me shine with excitement when it's complete. Let me list the few things that have made me do just that: my own homemade t-shirt quilt, my homemade hooter hider and my sister's t-shirt quilt that I made her for Christmas (which she loved...or at least said she did). That is the extent of my sewing projects! So when I come up with one and it actually works, I am nothing less than thrilled to the bone.
So what is it this time? I thought you'd never ask.
When we moved into our house we quickly realized that something was going to need to happen with the window in the bathtub/shower. Yep. A real, honest to goodness see-it-all-while-you're-naked-showering window. Because our move was so quick (closed on April 26th, in by May 1st) we didn't have time to think of many options before we moved in. As embarrassing as it is, we showered with a trash bag over the window for um, a few weeks. We originally purchased blinds for that window (along with all the rest of them), but learned pretty quick that wooden blinds weren't going to hack it in the shower. We also learned that we needed to get something in there to save the window from the water (who puts a window in a shower?!@#). I wanted a curtain, but couldn't find a vinyl, shower curtain-type curtain. So while at Target with Auntie K one day, I saw a shower curtain that matched our color scheme for only $9.99 and bought it hoping I could do something with it.
With the encouragement of the aunties and the Farmer, I decided I would make the curtain! So I cut the shower curtain ever so carefully. After doing a test with the sewing machine and butchering the leftovers, I moved on to seeing what would happen with the iron. I thought maybe I could heat seal a seam to hang it from. Uh. No.
I finally decided I would hand stitch and even though it took awhile, I am pleased with the result. And voila! we have a window curtain for our bathroom and no longer live with a trash bag on our window. 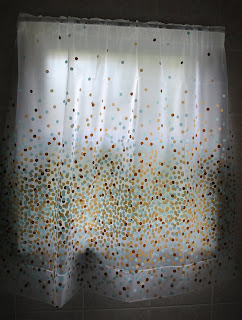 I might just be a farmer's wife after all.
Posted by The Iowa Farmer's Wife