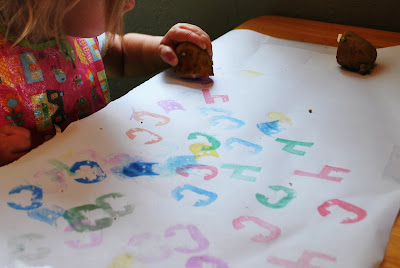 Last week was a bit rainy and there were a couple of days when we were cooped up after naptime. I've been wanting to try potato stamping with Sweet P for awhile (and I had some potatoes that were starting to look around the room if ya know what I mean) so we gave it a shot last week. Cutting the stamps was a little difficult, but I think my C, 4 and cat look pretty good! (We were focusing on the letter C and #4 last week.) 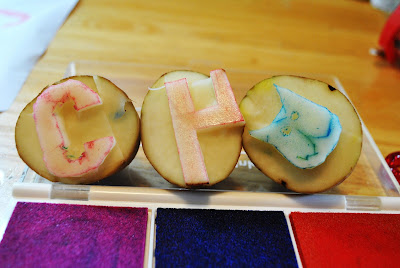 The hardest part for Sweet P was NOT eating the potatoes! She loves potatoes and could not understand why I wouldn't let her eat them. That's why there are black walnuts in the pictures...I needed a snack distraction!
The cat was, of course, her absolute favorite. I also got out two block stamps (1 spot at Target) she'd gotten as gifts for her birthday. We had a great time with this and I hung the butcher paper on our basement door. She loves to point to it and say "Made that!" 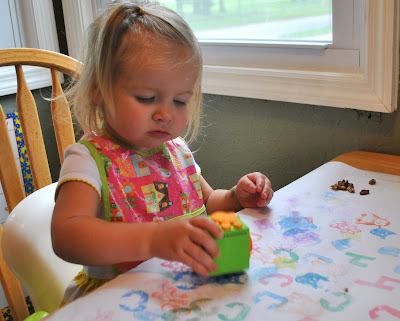 The Craft: Potato Stamping
What you need:
1 to 2 potatoes (or more if you're feeling adventurous!)
sharp knife (mamas only!)
butcher paper
stamp pad or paint
Cut the potatoes in half and dry them off a bit. Cut out the shape you'd like using the knife (remember to cut it backwards if you are doing letters or numbers...I learned this the hard way). Once you've got it how you want it, stamp away! 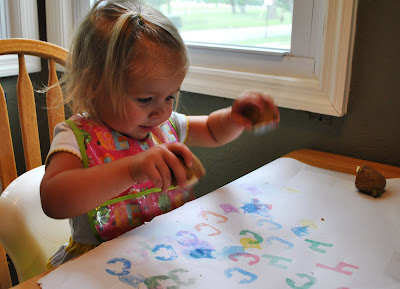 You could also take these outside and stamp with water on the concrete!
Sweet P kept herself busy with her scissors while I cut out the stamps. Probably should have done that while she napped, but she had a blast with those scissors! 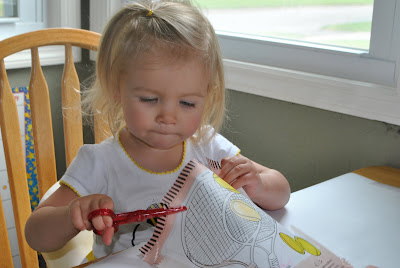