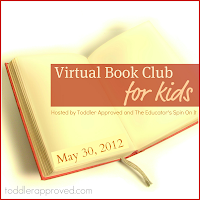 We are so excited to be part of the Virtual Book Club hosted by Toddler Approved and The Educators' Spin On It! The book for May was The Very Quiet Cricket by Eric Carle.

Sadly, we couldn't find the book at any of our local libraries (they were all checked out!) and my online bookswap didn't have it. Thankfully, The Educators' Spin On It posted a youtube video of the book being read aloud with animated pictures. Perfect! I sat down and watched it with Sweet P and did some explaining.

The Farmer and I told her how only the male crickets chirp. The Farmer knows this because he teaches a lab on crickets. I know this because I was owned a tree frog who ate LIVE crickets. Guess who once bought a bag of the WRONG crickets? This gal! Yep. So I know a thing or two about crickets. Or lack of sleep due to crickets. Anyway.

We finished the video and told Sweet P we were going to play a cricket game and hunt for a cricket after bathtime. Oh boy!

She grabbed her bug kit and new flashlight (she got it for her birthday from a friend) and we headed out to the yard. 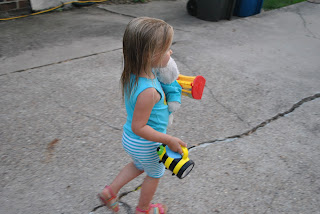 I heard one right away, but it took a minute for her to narrow down the noises. We had her close her eyes and listen. I said, "Do you hear that?" And she said "It's a bird."

I explained that crickets make a chirping sound and did she remember the noise the cricket made in the book. She did so we set to work finding him. 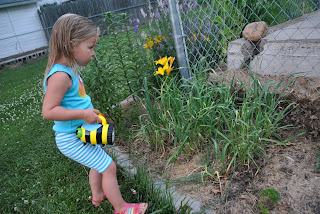 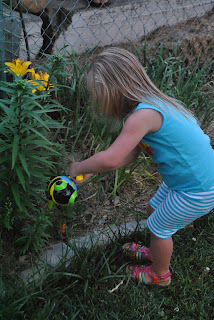 Looking hard for the cricket

We found out exactly where he was, but he was hidden by grass clippings! He'd stop chirping for awhile when we got too close, but started up when we'd stop moving around. 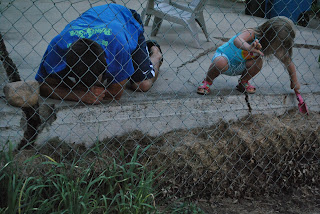 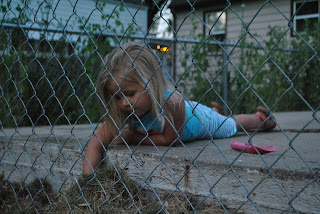 We couldn't find him (the Farmer really tried) so we settled on catching a firefly instead. 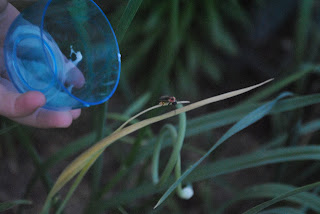 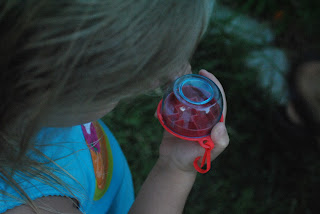 As we headed inside Sweet P was a bit upset that we didn't find the cricket so we did some more explaining about how crickets are great at hide and seek because of prey that eats them. She was satisfied with that and set out to find another one of our books with a cricket in it!

Sweet P also wants everything to be a girl so when I told her that the girls don't make noise she said, "I want to find the one that doesn't make noise."

This was such a fun activity and involved listening, looking and touching (the firefly). That poor firefly was probably a bit dizzy after all the shaking that went on while he was in the bug container.

Check out these other activities, crafts, songs and ideas from others who participated in the Virtual Book Club. It's not too late for you! Simply read the book, do something related to the book and link up! Please limit posts to those relate to The Very Quiet Cricket.