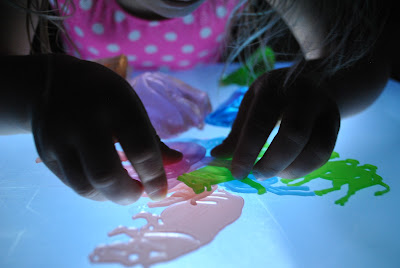 In lieu of features and in honor of my 600th post!!!, this week I'm posting about our DIY light table. It's something we've been meaning to do for a LONG time and finally got around to it. 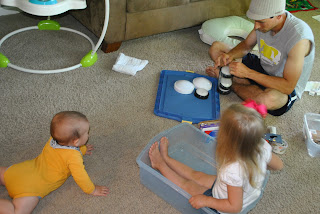 The Farmer and his helpers

Like others I've seen we started with Christmas lights, realized they had lead in them and went back to the drawing board. 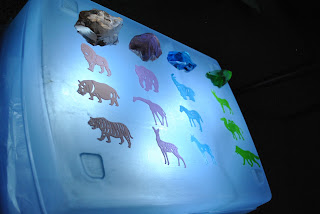 We decided on touch lights and I bought a few, but we ended up using some we already had (that I didn't remember we had). 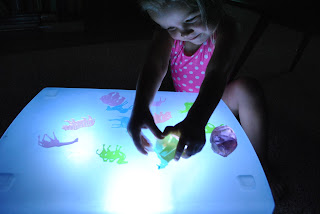 We used a blue tub and I really like the effect it has. It almost looks like pool water, which I think is pretty neat! 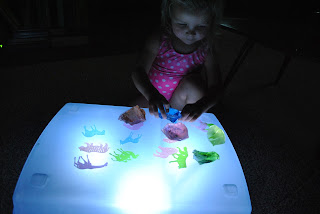 The Farmer lined the lid with foil and the top with wax paper to make it brighter, but we still think it needs a few more touch lights.

This project cost us $0 because we already had everything! Ok, except the $3 dollars I spent on cheap batteries at the $ Tree. 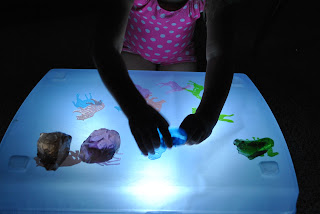 Once we had it, we had to wait until it was dark enough to use it because believe it or not every room in our house has a window (and we don't have walk-in closets...much to my dismay). We set it up in the basement since that gets dark fastest.

I found glow in the dark animals at $ Tree and Gammie has these super cool glass rocks at her house (in the craft closet unused) so I took them home when we there last.

After simply moving the animals and rocks around, we played a matching game. I played, too and even tried to trip her up by putting an animal on the wrong color, but she's too smart for that (and she switched it for me when she was checking my work).

She really liked putting the animals under the rocks and then started going to find more things to put on the light table. We are really excited to do this again! 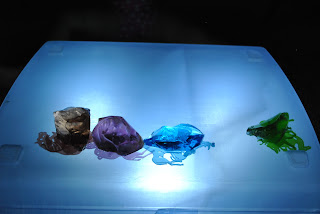 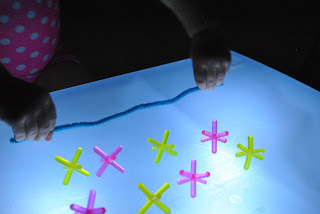 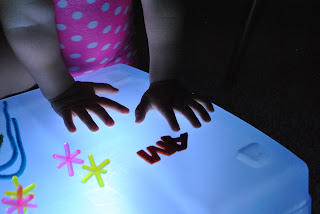