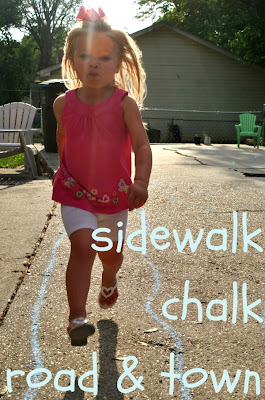 One day while Baby Blue took a massive nap, Sweet P and I took the monitor outside and had some girl time. Our friend let us borrow a ride on-scoot with your feet tractor so she was riding around the driveway when inspiration hit. I brought her inside while I scavenged for our sidewalk chalk (why is it never with the outside supples?!).

We went back outside and I explained to her what I was doing and went to work. I used 3 large pieces of chalk to create my masterpiece and can I just say it was AWESOME! She loved it and it got HOURS of play before the rain washed it away. 2 others have been created in its place (and washed away as well) and I'm pretty sure we're going to have a sidewalk road and town all summer long.

It took about 3-5 minutes to draw the road and then a few more to draw little places from around town. I put several items that are on our car mat and then asked her for more suggestions. She wanted 2 parks, Costco, a coffee shop (which she named "Have a Nellie Sue"), Trader Joe's, the mall, our house, the farm and the farmer's market. I also drew Hy-Vee, Target, a swimming pool and some fountains we go to during the summer. 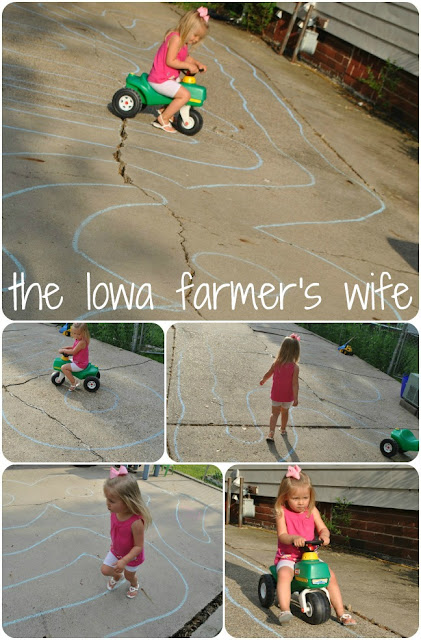 She filled in a few dashes in the middle of the road and drew people going down the slide at the park. After the 3rd round of roads the Farmer drew parking places for her dump truck and tractors. We have a terrible driveway, but she doesn't seem to mind and maneuvers over the cracks like a pro.

I played, too by running along the road and pushing the dump truck. She'd start at one end while I started at the other and we'd race to each other. When I reached her I'd swoop her up and spin her around. We had SO much fun! 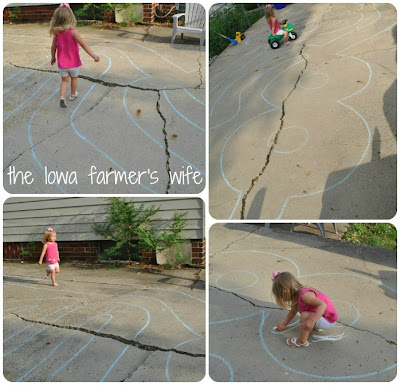 See the growth in the bottom left picture? She used it as a carwash for her tractor until sadly on Saturday the neighbor cut it down. She asked the Farmer "Why did you cut down the carwash?!"


I can't believe I didn't think of this sooner! It's cheap, simple and she LOVES it!
Posted by The Iowa Farmer's Wife