FINALLY! Baby Brother's Birth Story...oh come on, it didn't take me that long!

Let's just start off by saying, I LOVE my doula! Thank you so much to Katie and all she did for us during the birth of Baby Brother.

We decided to have a doula when I was about 12 weeks pregnant with Baby Brother and it was the best decision we could have possibly made as we prepared for his birth. I had an epidural with Sweet P and hoped to avoid one this go round. It wore off when I began pushing (and I pushed for 3 1/2 hours). I really wanted to have a natural birth this time and having a doula was our first step in that direction. As you read our birth story, I hope you'll see why a doula is such a great person to have with you during birth.

My hope was that I'd be able to labor as much as possible at home, however, my body didn't agree with that and my water broke at 2:30am. I was dead asleep and shot of bed. I yelled at the Farmer and quickly called Katie. Since Auntie RoRo had gone to Nebraska with Uncle Will, I called our backup Kate and her husband to come sleep at our house. Needless to say I was a tiiiiny bit stressed that it was happening this way.

We scrambled to get everything together and got to the hospital at 3:15am, checked in and got hooked up to the monitor. Water was definitely broken, contractions weren't doing much and my blood pressure was high so I had to stay hooked up to the monitor for a bit longer. I was finally allowed to walk the halls so Katie and I walked while the Farmer got some sleep. After 30 mins, they rechecked BP. No good and I had to stay in bed for awhile. They gave me a bag of IV fluids to see if that would help (it didn't) and then I was allowed to bounce on the ball. Sometime during all of this, I progressed from a 4 to a 5, there was a shift change and we got new nurses and 2 new midwives.

My BP was not cooperating and my contractions weren't consistent or close. The midwives started talking pitocin and I started to stress. Once everyone left the room, I cried and told Katie and the Farmer I didn't want pitocin (and I was worried about Sweet P). Auntie RoRo and I texted for a few minutes and when I found out she was coming back, my stress level went down about 90% (unfortunately that didn't help my BP). During this time, Katie was looking for ways to speed up labor and lower my BP. We asked if I could take a shower and Katie suggested nipple stimulation. Before this situation, I thought nipple stimulation was awkward. I can now say that nipple stimulation sped up my contractions, helped me avoid pitocin and led me to the natural birth I had hoped and prayed for.

The midwives allowed to me to take a 15 minute bath and between the bath and nipple stim, the contractions became 3-5 minutes apart. And away we went. The only problem? My BP.

Because of my BP the midwives wanted me to stay in bed and this made contractions excruciating. After another check, they decided to try the Texas Roll to get his head to move into position. My BP did NOT like this and luckily we only had to try it once. Because it was hurting my back to lay on my back, I began contracting on all fours. This really helped take some of the pressure off my lower back, but I really just wanted to stand and way with the Farmer! There were several times I felt like I needed to push, but when they checked I was only an 8. To help me get through each contraction I'd talk positively to myself saying "You can do this" and "God, please help me." "Damn you, Eve!" was another popular thought in my head during contractions! Katie was really helpful with encouraging words and allowed the Farmer and I to work together during contractions.

The nurse finally allowed me to stand because my BP wasn't getting any better in bed or out. Standing during a contraction really helped him move into position and finally I said, "I feel like I have to push. Actually, I'm not pushing and he's going to come out." The next few minutes were a blur as they rushed in to prepare for the delivery. Because of Sweet P's birth I thought we'd be pushing for awhile so I geared up for a pushing marathon. After the second push, the midwife asked if I wanted to feel his head. I never thought I'd be one to want to do that, but when I felt it, it helped me realize he was right there! I pushed 2 more times and he was out! 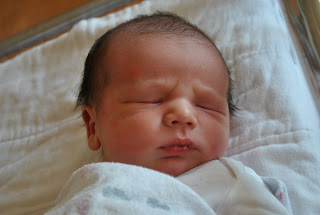 He didn't cry right away and I remember saying "Cry. Please cry." (The Farmer thought this was funny because no one else seemed concerned that he wasn't crying). And he finally did! They laid him on my chest and checked him while I delivered the placenta. The feeling of relief and joy that comes after delivering the placenta is indescribable. Baby Brother was born at 12:49pm and weighed 8 lbs 15 oz. (3 oz. more than his sister). 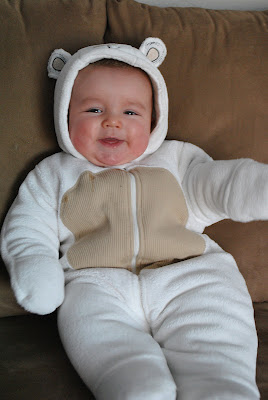