We've been talking about presidents for a few days in preparation for President's Day. I have to be honest about something: I didn't know Abraham Lincoln was the 16th president! I kept telling Sweet P he was the 5th until my mom said "He is NOT the 5th President" and rattled off the first 10. I guess because he is on the $5 bill I thought he was number 5! Silly me.

In addition to our activities, we watched The President! and President's Day 2012: Washington to Obama videos on YouTube.

Here are our trays from today:
These are President cards I picked up at Target's $1 Spot in the fall. I picked out George Washington, Abraham Lincoln and Barack Obama to show her. There are facts on the back, but we just looked at the pictures. She picked up the Obama card and the Washington card and drew them on her dry erase board. 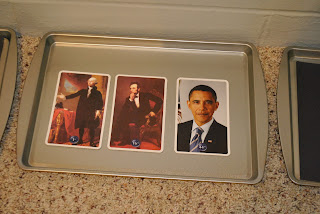 Build a Log Cabin: We got this idea from Carrots are Orange and Sweet P had a great time with it! I filled a small bowl with water glue (a mixture of water and glue) and she used a paint brush to brush the glue onto the page. I numbered the sticks and she glued them down in numerical order. We talked about triangles and rectangles as she glued on the door and chimney. Sweet P loved the door and said "Someone is going to come out!" 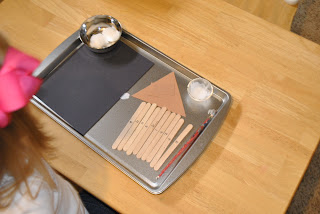 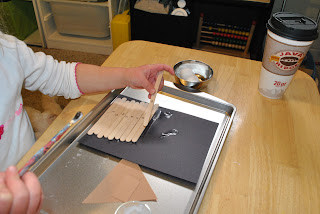 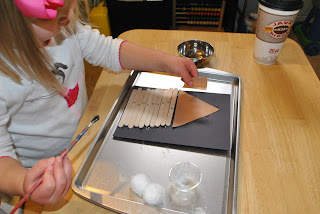 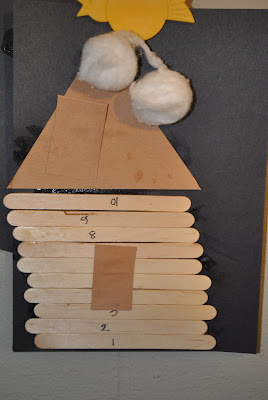 George Washington Cotton ball Wig: I printed this color sheet from Twisted Noodle on card stock, cut around his head and glued the card stock to a piece of black construction paper. She used a paintbrush and water glue to glue the cotton balls onto the paper as George Washington's hair. We both thought this was so funny and when she was finished she announced "He has pigtails!" She asked to color his shirt so we got out markers. Pink polka dots of course! She also colored one eye pink. Wonder if they had pink eye back then! 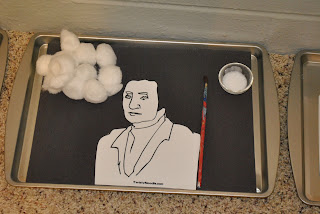 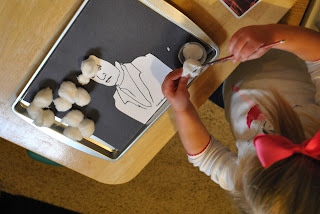 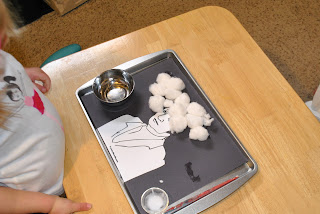 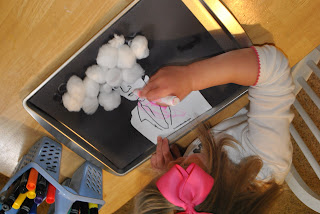 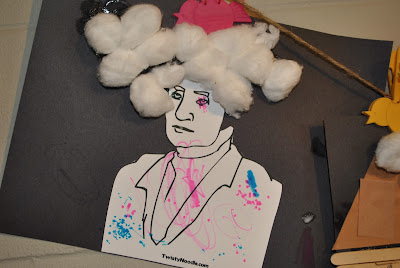 Washing and sorting coins: The small boxes held pennies and quarters since we were talking about Abe Lincoln and George Washington. Sweet P spread out the towel on her table and then brought the water bowl over without the tray to avoid spilling. We added another towel to dry the coins and a bowl of just water (the glass bowl had dish soap in it). 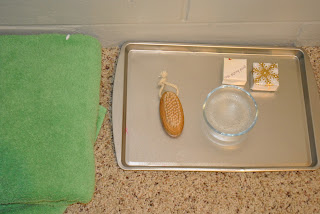 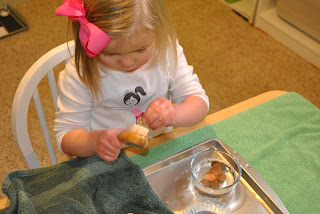 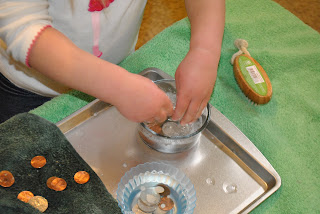 After she tired of washing the coins (she wasn't super interested in brushing them), she wanted to do water transfer so I brought her a little lid (it's a Gatorade lid). 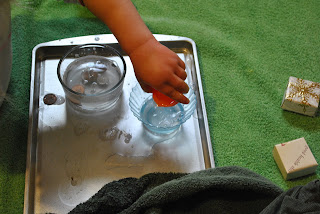 Sorting: After she was finished with the washing and water play, she dried them off and sorted them back into the quarter and penny boxes. 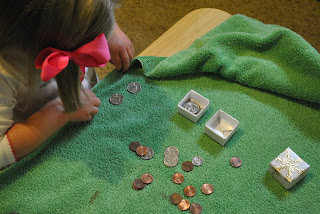 Making a Pizza: This doesn't have anything to do with President's Day, but when she was done playing with trays she wanted to play with her grocery store. Then she told me she went home to make lunch. What did she make for lunch? A big pizza, of course! It was fun to dump it all out, but she wasn't thrilled about picking it all up! Cleaning up was a great sorting activity, though she dumped out so many different containers. 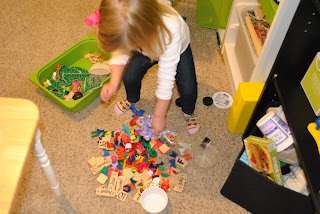 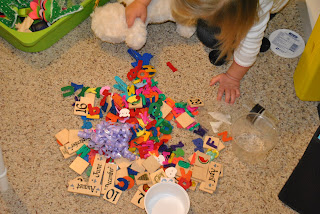